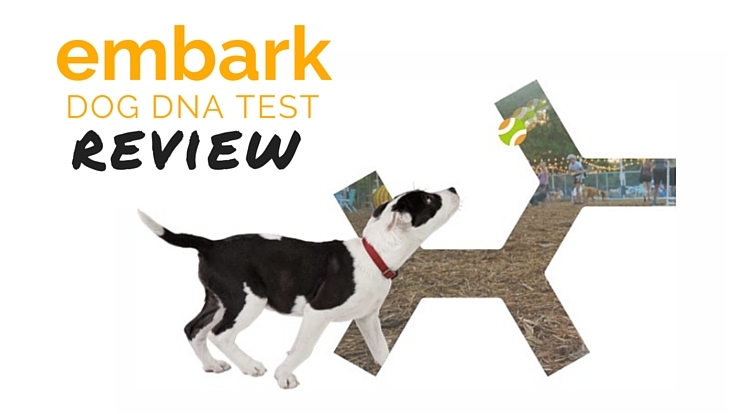 What Is It? Embark is a cutting-edge dog DNA test that promises more data and actionable insight into your canine’s breed, health, and ancestry than any other kit.

Embark deliver significantly more dog DNA data than competitors, providing a rich and complex history of your dog’s ancestors and over 160 tests for health issues (most other kits may test for one or two health issues, if even that).

In addition, Embark surpasses all other dog DNA test kits when it comes to genetic markers, which means their testing is as accurate as scientifically possible.

Lastly, the unique reporting style, app integration, and ongoing updates regarding your canine’s health all put Embark a step ahead of the rest.

The only other disadvantage to Embark is the turn around time (3-7 weeks as compared to 2-3 weeks for other DNA test kits), so if you want results ASAP, this might not be the best kit for you.

See our video review covering what we’ve mentioned above, or continue reading for more details.

Let’s take a closer look at some of the biggest, ground-breaking aspects of Embark’s dog DNA test.

What Makes Embark Different From Other Dog DNA Tests?

What sets Embark uniquely apart from other dog DNA test services is their comprehensive, all-in-one approach.

However, Embark doesn’t just dip a pinky into the water – they dive full in, going more in-depth and providing tons more data than other services. In addition, Embark uses the full weight of scientific research to be as thorough and accurate as possible.

They’re not doing anything new, but they are doing it better – much better.

Commitment to Improving Your Dog’s Healthspan

Embark focuses a lot of the dog DNA discussion on how to improve your dog’s “healthspan.” For Embark, the term “healthspan” correlates to whether or not your dog can perform the activities he enjoys – basically, your canine’s quality of life.

Your dog’s lifespan is how long they live until, but for many dogs, their healthspan deteriorates earlier.

Improving your dog’s healthspan ensures that your dog is able to romp on the beach and play fetch with the frisbee as long as they can.

As Embark notes, Americans spend, on average, over $400 in veterinary expenses each year, per dog. This can increase even more as a dog gets older and faces more health issues. Embark focuses on helping owners prepare for possible genetic health conditions and take preventive action that can allow owners to bypass costly treatments down the road.

Understanding the Rich Story of Your Dog’s Ancestry

Anyone who has taken a human ancestry test knows that being 15% French and 75% Irish, in and of itself, isn’t all that interesting.

What we really crave is the story that these numbers reveal – how did your ancestors from Paris get over to Canada? When did your great-grandmother migrate to Boston and meet your devilishly handsome Irish great-grandfather? What were their careers like? When did they marry? What did their families look like?

The narrative about our ancestors (and, as an extension, ourselves) is the real fascination revealed through ancestry.

Yes, we love our mutts, and we don’t really need to know if their parents were labradors or bull mastiffs. We don’t need to know. But we want to know, because we love them. And when you love someone, you want to know absolutely everything about them!

While traditional dog DNA tests give us the numbers and can provide some inspiration with regards to how our dog ended up in our family, Embark gives a real narrative – the kind that tells a rich, authentic story.

Embark creators spent years studying village dogs and their history, working with National Geographic and other scientific organizations, to study dogs across every continent and better understand the genetic diversity of canines around the globe.

Embark provides loads of context into the history of your dog’s ancestral breeds, explaining how your canine’s great-grandparents lived, where they probably migrated from, what kinds of humans they hung out with, and how your dog’s ancestors were domesticated.

Embark can even distinguish ancestral heritage by the maternal and paternal (Y chromosome) haplotypes – something few (if any) other dog DNA tests can do.

Embark tests for over 160 health conditions and disorders, including a myriad of genetic diseases that can occur throughout your dog’s life, such as glaucoma, degenerative myelopathy, and dilated cardiomyopathy, three of the most common adult-onset diseases found in dogs. You can see the full list of diseases Embark tests for on their website.

Being able to catch these diseases early (or even simply know what to be on alert for, based on your dog’s genetic history) means owners can work with vets to start treatments earlier, take proactive preventive measures, and keep your canine living longer.

What’s even cooler is that Embark plans on continuously increasing the number of health conditions they test for as they conduct more research.

Despite this comprehensive health assessment, Embark is adamant about the fact that they do not provide medical diagnosis. While Embark’s dog DNA test can help alert you to potential health problems, you should always talk these concerns over with a veterinarian.

In addition to interesting breed ancestry discoveries and important health info, embark also reveals a ton of valuable data that will help you be a better owner for your dog.

Embark boasts a database of over 150 breeds, covering coyote, wolf, and village dogs. Collectively, these breeds cover over 98% of dogs in America! Embark has the power to break down the exact breed composition of your canine and provide information on those breeds in a colorful, easy-to-understand format.

While some other dog DNA tests do also test for coyote and wolf, Embark’s test for village dog ancestry is entirely unique and frankly, quite groundbreaking.

So what exactly is a village dog? Village dogs are the free-roaming dogs that are found living around human settlements all over the world. Think of them as the original working dogs, serving as trash cleaners, home security alarms, as well as companions.

Also known as island dogs or pariah dogs, these canines aren’t usually thought of as pets, but rather live on their own while practicing a mutually-beneficial partnership with humans. These relationships are similar to how dogs first began to be domesticated many thousands of years ago.

Village dogs make up 3/4s of the billion-ish dogs on the planet today! Village dog populations usually precede the formation of today’s modern breed dogs. Village dogs have remained largely un-identified, but since the Embark team has begun researching them, this insight is now accessible to owners!

Embark is the only dog DNA test that can test for village dogs and distinguish where village dogs come from – pretty impressive stuff!

One of the most impressive aspects of Embark is the advanced technology they’ve put behind their dog DNA test. Embark uses a proprietary 220,000 DNA marker microarray technology, resulting in a remarkably detailed view or your dog’s genome.

What all this boils down to is the most in-depth, most scientifically accurate dog DNA evaluation possible, period. There’s no one else that even gets closer to these numbers – Embark is leading the pack.

So what should an owner looking to pick up a dog DNA test do?

Embark is significantly pricier than competitors, with price tag 2x higher than most other dog DNA kits on the market.

Despite the price difference, there’s no doubt you’re getting more for your buck (or bone) with Embark.

If you’re simply curious about your dog’s breed ancestry, then you’ll probably be quite satisfied with Wisdom Panel (and it’s worth noting that Wisdom Panel does test for a few health conditions, such as the Multi-Drug Sensitivity and Exercise Induced Collapse screening).

However, if you want the most comprehensive playbook for your pup, Embark is the way to go. You really get the full scientific force working in your favor with Embark, providing direct deliverables that will help your dog’s health and wellness. Plus of course, you’ll learn much more about your dog’s breed history than any other test can provide.

If you can dish out the money for Embark, it seems that it will an investment that lasts a lifetime, possibly even putting additional years onto your dog’s life through better health care.

Order Embark For Your Pup!

Will you try Embark for your pup? Why or why not? Tell us your thoughts in the comments!

Embark provides deeper genealogy and heath data than any other dog DNA test on the market. It’s accuracy is unbeatable, with over 200,000 genetic markers and an extensive breed database that even catalogs wolves, coyotes, and village dogs!

Plus, it’s backed with unique bonus features we haven’t seen anywhere else, like lifetime updates, vet reports, and a downloadable app.

The price is steep, at over 2x as much as other dog breed DNA tests, but if you have the money to dish out, Embark is well worth it.

I got results for my puppy from a different brand and 50% was not identified. I wonder if your test would be able to identify the specific breeds rather then just indicating the probability that my puppies mixed breed is terrier.

Hi Kristein – we do not work with Embark, we simply review various dog DNA tests. Embark tends to be very well-liked though, so I am confident you’ll have more detail with their results. Good luck!

Hello, I sent a message via the ebark website but not sure if it went along ok or not. My name is Will Pryor and I am the head animal care taker and staff biologist at the wolf mountain nature center located in upstate NY just about 1 hour from Cornell. We are a 501C3 non-profit wolf education center and we also have eastern coyotes and arctic foxes. We have a few rescue animals and also some very rare wolf lines here at the Center. Our staff is all 100% volunteer and we receive no grants, have zero corporate sponsors and exist only through a small admission donation for the public and we do all our own work, fencing, landscaping. You get what I am saying. Do you have any discounts or grants to assist a Center like ours. I look forward to having a chat. Thanks for your time.

Once I use Embark at that point can I rregister my dog?